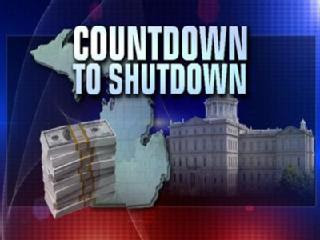 In case you have not heard about this... our state government is on the brink of shutting down.
This is not a joke, farce, spoof, or threat. October 1st, 12:00:01 AM EST. Our government stops.
What does this mean? Nothing good. Emergency care and hospitals will still be up and running. But a lot of things will not. Things we all take for granted.
For instance: no purchasing of a lottery ticket, liquor can be made. No renewal of licenses or plates. State funded parks, roadside stops and a lot of bridges will close. Well... why not read on for a more indepth (yet not all inclusive) look into what will happen in just under 27.5 hours from now. You can go HERE for the full article.
Again... this is a partial list (Copyright 2007 by The Associated Press. All rights reserved.)

CIVIL RIGHTS: All Department of Civil Rights activities will stop during a government shutdown.

ENVIRONMENTAL QUALITY: The Department of Environmental Quality will maintain only limited staff during the shutdown to meet U.S. Department of Homeland Security air-monitoring requirements and process critical drinking water samples to address the most immediate public health concerns. All other department functions will shut down.

HISTORY, ARTS and LIBRARIES: All department operations will shut down except security and emergency monitoring services at the Mackinac Island Airport and public areas. The Library of Michigan, the Michigan Historical Museum and historic sites around Michigan will be closed. Mackinac Island paid admission sites will close and garbage and manure pickup and road maintenance will cease.

LOTTERY and GAMING: Lottery sales will end at the close of business on Sunday. However, the casinos will remain open due to a Wayne County Judge's ruling Friday.

NATURAL RESOURCES: All Department of Natural Resources operations will be shut down, except a minimal crew to maintain the state's six fish hatcheries and a small contingent of forest firefighters needed to continue work at the Sleeper Lake fire in the Upper Peninsula and to respond to other fire emergencies. A shutdown will require that all state parks, recreation areas, visitor centers and state forest campgrounds be closed, including day use areas.

SECRETARY OF STATE: Secretary of State Terri Lynn Land has indicated that branch offices will be closed during the shutdown. Online or mail transactions will not be processed.

STATE POLICE: Although all Michigan State Police posts will be closed to the public, a limited number of troopers will be maintained to provide critical law enforcement services across the state.

TRANSPORTATION: All road construction, routine maintenance and administrative operations will stop. The state's rest areas will be closed. Six of the state's lift bridges, in compliance with U.S. Coast Guard regulations, will be locked in the 'up' position, allowing only water traffic to pass.


The frustrating thing? They have had 8 months or so to come to an agreement on the budget. And Governor Granholm has stated that no budget offering that has crossed her desk she can agree to. She is holding her ground, and there has been so much inner battling that nothing has gotten accomplished. I am not blaming her. She made it clear months ago that she needed a budget that would not sacrifice education funding and other important aspects of life here. So now we are down to the wire. Literally.

It is sad that things take escalating to this level, the level which a shutdown is imminent, to get people to start talking to each other.

I mean just a few years ago the city of Flint was taken over by the state government due to lack of leadership accountability, and total mismanagement of funds. (GM pulls out - the city collapses) The office of Mayor was a joke.

The city of Detroit has had its battles and constant investigations into the mayor and (supposed) mismanagement of government funds.

VW moves it North American Headquarters out of Michigan. Other companies refuse to come here *cough*Toyota*cough* despite Granholm's (supposed) attempts at showing that Michigan is an economically agreeable state to do commerce in.

Students in Michigan universities aare leaving the state in higher numbers than ever. The reasoning they site? There is no future for them here.

The High-5 state is definitely in need of repair.

I hope that the government will not shut down... but right now, it looks as if we are in the final countdown. *que Joey Tempest and some killer synth rock*


})i({ Runnergirl
Another fine rambling by Jenniferlyn at 7:07 PM

Jenn, we had that same problem in MN a couple of years ago. People were not happy at all of the end results when it shutdown, but the governor and legislature was spending OUR money to argue about it - so sad!

It was short-lived but we still need a way to eliminate this from happening again. Now we’ll have to deal with a new set of taxes on services. Is the writing on the wall yet?